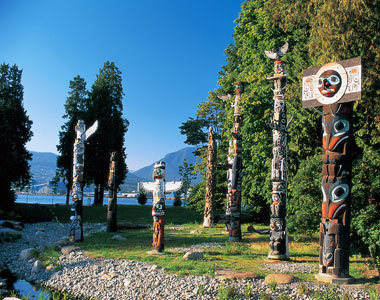 Stanley Park first of all is a great place to go for the family. Stanley Park is the best know and biggest park in Greater Vancouver are and is also known around the world. Situated on a peninsula at the northwestern edge of downtown Vancouver, it has 1000 acres of park and it is acessible in the middle of Vancouver and it attracts approximately 8 million visitors each year 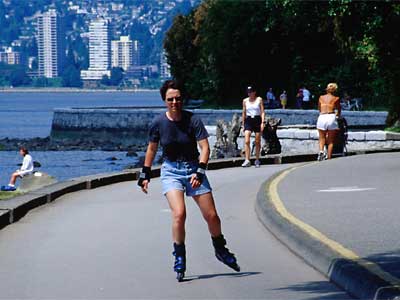 The best way to see Stanley Park is to start somewhere along the loop and go around the park. You can do this by driving or if you are more physically fit walk the whole loop. Alternative modes of travel are biking and rollerblading and you can rent both of these at stores near Georgia and Denman Street or bring your own. The loop road at Stanley Park goes counter clockwise the car traffic is slow (speed limit) and the total distance is about 6 miles, so if you plan to walk the whole thing make sure you have ample time set aside. . Walking the loop has many advantages like seeing the landmarks along the way and getting some exercise.

Stanley Park has no shortage of trees (500,000 cedar, fir and hemlock trees) to look at as well, there are lots of trails to hike along inside the park, lovely beaches, miles of well-maintained paved. Canada’s largest aquarium and there is a swimming pool, water park. There are also has a miniature train and farmyard for kids and during Christmas season the train and farmyard are decorated in festive lights.

Gardens
Stanley Park is also known for its spectacular gardens that bloom year-round.

Sightseeing Spots
The park is full of fascinating landmarks heritage destinations, including First Nation artworks, sculptures, fountains and a lighthouse.

Dining
Stanley Park is home to four unique restaurants, ranging from the causal cafe to the fine-dining seafood house. 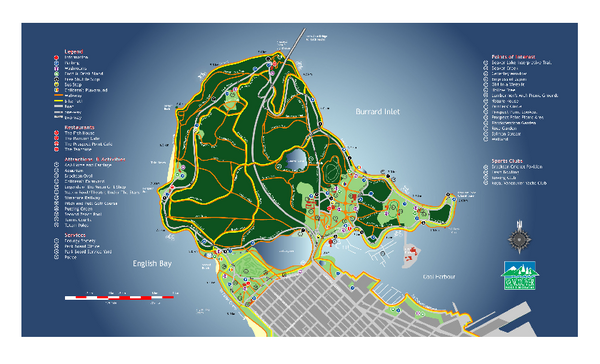 Beaches & Lakes
The park is surrounded by water, with beaches and lakes that are good for walking around and others that are great for swimming.

Seawall
Stanley Park’s most famous feature is its impressive Seawall, an 8.8-kilometre paved route that loops around the park.
Sports
From tennis and golf to rowing and cricket, the athletic facilities at Stanley Park run the gamut.

How to Get There

While there are plenty of parking throughout Stanley Park, it’s recommended you get there by public transportation especially on busy summer weekends when parking spaces are at a premium for late arrivals.

Waterfront Skytrain station offers the best access to Stanley Park if you want to take in the Seafront of Coal Harbor on the way there.

Exiting the Skytrain at Burrard Station will get you within a block of Georgia Street and from here thera are quite a few buses that goes to Stanley Park. Make sure to ask the bus driver if the bus stops near the entrance of Stanley Park, as some go straight through.

The number #19 bus takes you to the Stanley Park Loop, which is a which is great to explore the most of the park’s main attractions. You catch the number #19 bus on Pender Street or on Georgia Street west of Cardero.

There is a free Shuttle Bus operates in Stanley Park once you get there, it runs from June through September. This does a big loop around the whole park stopping at 15 of the most popular attractions. You can get off then on the bus as you like, it’s a great way to explore the park if don’t want to do a lot of walking.

This entry was posted in Tourist Attractions and tagged BC, Canada, Information, Stanley Park, Vancouver. Bookmark the permalink.