Robson Street was named after John Robson who was the Premier of British Columbia starting from 1889 to 1892. Back in 1895 there used to be train tracks along Robson street because it was a trading and commercial area and eventually all types of small shops were set up by merchants to service Vancouver’s fast growing population.

After World War II Robson Street was known as “Robsonstrasse” which represented the European shopkeepers influence. The store owners ran small delicatessens, patisseries, and chic clothing boutiques that lined Robson street.  Over the next 100 years Robson Street’s popularity and character continued to evolve. 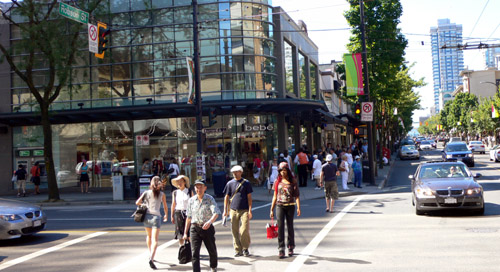 Robson Street is now Vancouver’s most famous shopping street right n the middle of downtown Vancouver. It’s a three block stretch between Burrard and Jervis street you will a great mixture of shops and restaurants which has become even more pronounced and more appealing in the last 20 years and today locals and tourist alike can find along Robson and its side streets, restaurants for fine dining, premier fashion brand stores and services. Also Robson Street is a great place to sit outside have a coffee and ‘people watch’ as the locals and tourist goes shopping and hangout on the street. 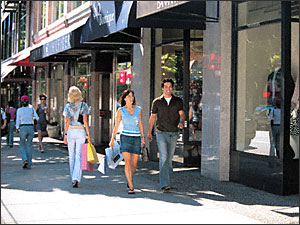 During the evenings Robson street and surrounding areas liven’s up with colorful buskers and performers. Both locals and tourist enjoy drinks and fine foods at some of the city’s most celebrated restaurants. Robson street is renowned both on a worldwide level and locally as it remains a favorite shopping destination for locals and well as foreign visitors. Robson Street is must see if you ever visit Vancouver’s downtown area.

One Response to Robson Street, Vancouver, BC, Canada – Shop, Sights and Dining